Dispora Will Face the Governor to Submit SK PON 2024 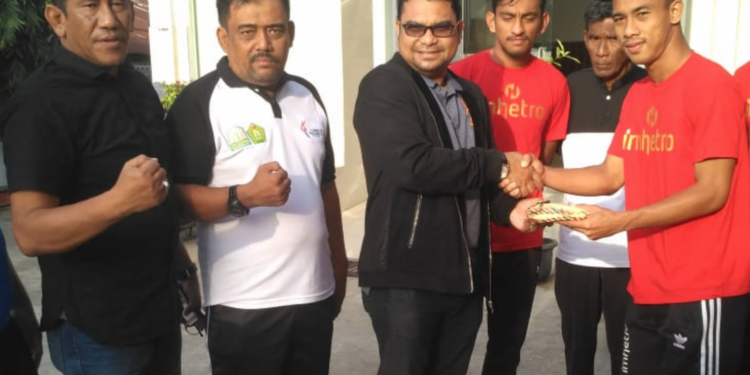 Aceh Kadispora Dedy Yuswadi handed a bonus to the captain of the Porwil football team | Photo: Is

ACEHSPORT - The Aceh Government through the Youth and Sports Agency said it would prepare a number of strategic steps, along with the issuance of the decision letter to determine the PON host to 21 year 2024 by Minister of Youth and Sports Zainudin Amali.

Head of the Aceh Province Youth and Sports Office, Dedy Yuswadi, AP in Banda Aceh, Sunday (21/11) mention, his party will immediately report the problem and ask for direction from the governor of Aceh, Go Nova Iriansyah.

“Thank God, we have obtained the SK to appoint the 21st PON maintenance host. "We will report the various preparations for the implementation of PON and later also ask for directions from the Governor of Aceh,"Said Dedy.

He explained, There are several steps that will be prepared in order to make Aceh successful as the host of the National Sports Week. Among other things, he called, the formation of the PON preparation team, budget allocation for venue construction through the Aceh Revenue and Expenditure Budget (APBA) and prepare the master plan.

Then, continued Dedy, holding a PON mascot competition which will take place in Aceh and North Sumatra and other preparations. "We will also work optimally in accordance with the instructions from the Governor of Aceh,He said.

The man who once served as the Head of Satpol PP admitted that he had been waiting for the decree for a long time. The reason, Aceh is said to have prepared land to be built into sports facilities and venues for PON 2024 to come.

Even from 110 hectares of land that have been prepared, The Aceh government has added 60 another hectare of land to be acquired for the construction of the Main Stadium. "We are very ready with all the preparations to host PON 2024," he said in Jakarta a few days ago.

"With the issuance of this decree, we still ask for central government support, not only budget but also technicality so that the implementation of PON Aceh and North Sumatra can be carried out properly,"Said Dedy.

Previously, the Minister of Youth and Sports, Zainuddin Amali, officially submitted a decree (SK) determination of Aceh and North Sumatra as hosts for the National Sports Week (MON) XXI 2024.

In the submission of the SK the determination of the host PON 2024 at the Kemenpora Office, Jakarta, Thursday, Zainudin said the decree was urgent to issue because it contained new regulations regarding the implementation of PON which for the first time in history would be held in two provinces..

“The SK to appoint the host of PON XXI really feels long enough, because indeed the old rule was only known by one province. However PON 2024 it was decided to be held in two provinces, Of course the rules change,”Said Zainudin.

Pidie Boyong General Champion Status, This is the End Result of Archery