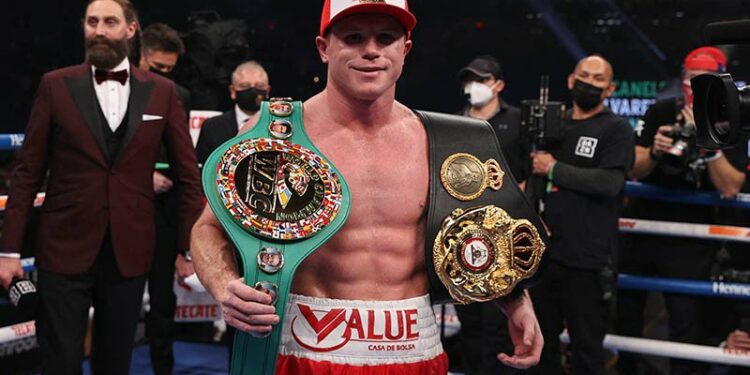 Mexico's Alvarez dictated to Yildirim from the opening bell and sent the Turkish boxer down to the canvas with a sharp left-right combination in the third round..

Turkish boxers aged 29 The year looked hesitant from the start as Alvarez landed a series of body hooks and upper punches to easily win the first round..

The second round follows the same pattern as the first. Yildirim barely put up with any resistance as Alvarez mercilessly bombarded his opponent's ribs.

In the third round, Alvarez returned to attack Yildirim who was still passive. Alvarez's straight left landed on Yildirim's chin and a subsequent right sent the Turkish boxer upside down and falling to the canvas.

Yildirim got up and was able to hold on for the rest of the third round. However, As Yildirim slumped into his corner chair, trainer Joel Diaz is heard telling the boxer that he will only give him one more round, before finally throwing in the towel.

“I want to fight great here and I do what I have to do,” Alvarez said as quoted by AFP.

“I needed a knockout and that's what I did. It doesn't matter if he's taller, he has a wider range, or he has a good coach. I came to do my job, I came here to win.”

Alvarez, yang rekornya menjadi 55-1-2 with 37 KO, has returned to the ring on Saturday roughly two months after he beat England's Callum Smith in December 2020.

After the fight, promoter Eddie Hearn said the Mexican star was aged 30 the following year it will seek to add a World Boxing Organization belt to its collection with a fight against Billy Joe Saunders of England, 8 May.

The fight with Saunders will be the next step in Alvarez's quest to become the true first-middleweight champion in boxing history.

“Nobody has done it yet,” kata Alvarez. “I want to make history. Nobody did…”

However, Alvarez dismissed suggestions that he wants to be remembered as the greatest boxer Mexico has ever produced. “I respect everyone but I want to make my own history,” kata Alvarez.