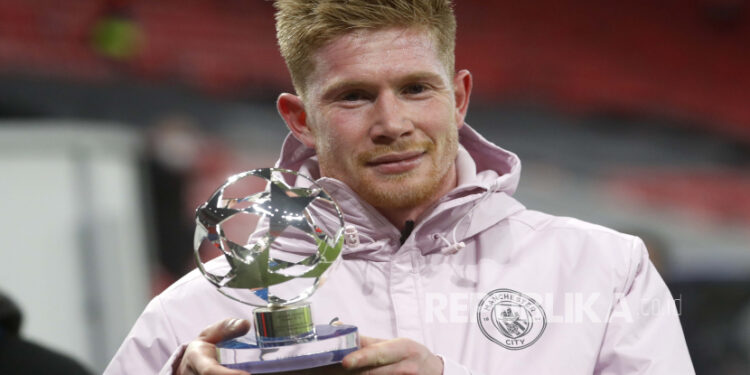 De Bruyne's journey to form as it is now has been difficult.

ACEHFOOTBALL.net - The German Bundesliga competition can not be separated from success Kevin De Bruyne with Manchester City. Because, brilliant career with the Citizens departed from two German clubs, Werder Bremen dan Wolfsburg.

De Bruyne honed his skills with the two German mid-table clubs. His career has not gone straight. The journey to reach the best form as it is now was passed with difficulty.

Quoted from the official German Bundesliga website, De Bruyne underwent an evolution before becoming one of the best players in the world. De Bruyne started his career at Belgian club RKC Genk in 2008 in ages 17 year.

Four years later, De Bruyne was withdrawn by Chelsea. But the tough competition in Chelsea's midfield at that time made De Bruyne loaned to Werder Bremen in season 2012/2013. Drongen born player, Gent noted 10 goals and nine assists to save the four-time Bundesliga champions from relegation.

Jürgen Klopp, who at that time handled Borussia Dortmund, are eager to withdraw De Bruyne at the end of his loan spell in Bremen. He wants to place De Bruyne as the successor to Mario Goetze, who moved to Bayern Munich.

However, Chelsea manager Jose Mourinho refused to let him go. Mourinho insisted De Bruyne had the ball-playing capacity and creativity that the Blues needed. Dear, in the end the coach did not give De Bruyne a regular position.

Transfer requests came in winter. At that time, Wolfsburg set a club record by disbursing funds 20 million euros to bring De Bruyne off in London in January 2013. He produced three goals and six assists during the second half of the season 2013/2014.

De Bruyne then pointed out Wolfsburg it's not wrong to pour out big money to attract it. He scored an assist record with 19 assist in a Bundesliga season, improving the previous record of Wolfsburg's Zvjezdan Misimovic, as they won the league title on 2009.

De Bruyne's record was then broken by Thomas Mueller in the season 2019/20. Further, De Bruyne was later named Germany's Player of the Year, after leading Wolfsburg to the DFB Cup title and finish in the runner-up position.

“To be named the best player in a foreign country is very good. This is a big acknowledgment of my season,” said De Bruyne.

Next season, he created his iconic moment with Wolsburg when his cross saw Nicklas Bendtner equalize in the DFL Supercup against Bayern Munich.

De Bruyne's penalty in the shootout then served as a farewell gift for Wolfsburg as they lifted the trophy.

On 2015 Wolfsburg officially released De Bruyne to a wealthy English Premier League club, Manchester City. At that time Wolfsburg was claimed to be so profitable by selling three times the amount they spent to bring it in. City, mentioned Wolfsburg officials, offered a huge salary that De Bruyne was hard to refuse.

At the end of the season 2019/2020, De Bruyne was named Premier League Player of the Season with 13 goal, 20 assist, and create 104 opportunities from open play, highest in all of Europe's top five leagues since 2006.

“What I saw from Kevin was amazing,” said Man City team-mate Sergio Aguero. “Out of nowhere he can give you a pass that you didn't even expect.”

De Bruyne has everything to compare with superstars like Lionel Messi and Cristiano Ronaldo. “After Messi there is Kevin,” said Pep Guardiola, City coach.

Guardiola knew what De Bruyne had and made a lethal weapon out of his quick thinking, accurate passing, high speed, and a sharp end solution. De Bruye is expected to be the next Ballon D'Or competitor.

Guardiola got to know De Bruyne when he coached Bayern Munich. De Bruyne stuck with Guardiola's memory as he scored twice for Wolfsburg in the win 4-1 over Bayern in January 2015.

Presumably, De Bruyne's presence at City was also one of the driving forces for Guardiola to accept the offer to train City at 2016.

In his homeland, De Bruyne was nicknamed the Belgian Pele. De Bruyne's action is awaited by City fans in the Champions League final against Chelsea, the end of this month. Belgian fans also hope De Bruyne shows his magic at the Euro 2020, next month.