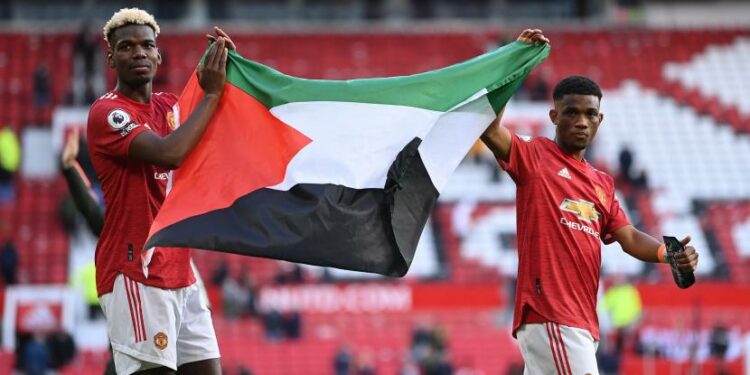 Edinson Cavani's opener welcomed the comeback 10 thousands of spectators in the stadium.

ACEHFOOTBALL.net — Manchester United were held to a draw Fulham with a score 1-1 in the ultimate home game Premier League them at Old Trafford Stadium, Tuesday (18/5) local time or Wednesday (19/5) early morning WIB.

Edinson Cavani welcomes her return 10 thousands of spectators who were first present at Old Trafford with a beautiful goal to bring MU in the lead.

However, MU in fact failed to take advantage of the presence of supporters at Old Trafford when their advantage was destroyed by Joe Bryan and the score 1-1 lasted until dispersal. This result does not affect the fact that MU has locked a ticket for the Champions League next season, but the position of the Red Devils in second place in the standings is in danger of being pursued.

MU has 71 points, only five points ahead of Leicester City (66), who just played in a more soluble match. Meanwhile, Fulham (28), which has been relegated since last week, did not move from the order of the 18th standings, according to the records of the official English League page.

MU has dominated the match since football and in the 15th minute, was able to open the scoring through Cavani's goal. Starting from the sweep of goalkeeper David de Gea, Cavani found the ball in the Fulham area and the aging attacker stood almost unmarked to fire a long-range shot over the head of goalkeeper Alphonse Areola..

Five minutes later, Mason Greenwood almost doubled MU's lead, but his header landed on the roof of the Fulham goal. In the 26th minute, Areola made a brilliant save to ward off a powerful Bruno Fernandes shot that snatched a pass from Cavani.

Fulham tried to respond with a header from Andre-Frank Zambo-Anguissa and a shot from Fabio Carvalho, but both can be secured by De Gea. Greenwood got another chance in the 55th minute, but again Areola able to ward off the shot from the MU academy.

At the opposite end of the pitch in the 61st minute, De Gea makes two consecutive saves on Ademola Lookman's narrow corner and Carvalho's header that tries to head the ball back up..

Unfortunately, De Gea did nothing when Bryan stood free at the far post to head home Boby Reid's cross in the 76th minute..

Referee Lee Mason and VAR had a look at the alleged offside before confirming the goal that brought Fulham to equalize.

However, The Portuguese player's kick was easily secured by Areola. Shoes 1-1 lasted until disbandment made MU close their performance at home this season with three games without winning.

The final series of matches are planned to be played simultaneously on Sunday (23/5) when United visit Molineux to face Wolverhampton and Fulham host Newcastle United at Craven Cottage.