by Riandi
in German League 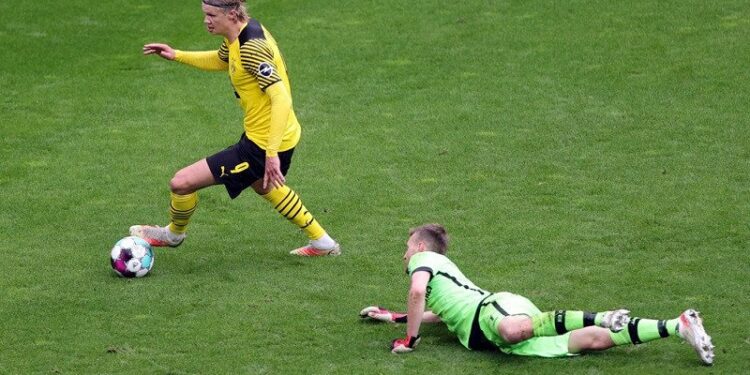 Both Haaland's goals flanked Dortmund captain Marco Reus' free-kicks, while Leverkusen could only respond once through the execution of a penalty from Lars Bender, according to the records of the official German League page.

Dortmund finished third with 64 points and earned a Champions League ticket, while Leverkusen (52) in sixth position and will appear in the Europa League next season.

Read it too: Dortmund key the big four after a win in Mainz

The game was barely five minutes after Haaland was able to finish Reinier's through ball with a left-footed strike that put Dortmund ahead..

The lead lasted until halftime amid Leverkusen's attempts to retaliate and in the 51st minute Dortmund doubled their lead when Reus fired in an accurate free-kick..

Dortmund continued to press and in the 84th minute, Haaland scored his 27th goal in the German league this season with a close-range shot at the mouth of the Leverkusen goal.

Leverkusen got a consolation goal through the conversion of Bender's penalty a minute before the end.

Although he has confirmed he will return to the Champions League after 2015/16, VfL Wolsburg had to close their season with defeat 2-3 when entertaining Mainz FSV at the Volkswagen Arena.

Mainz twice found their lead through Jean-Paul Boetius and Robin Quaison was always the same as Wolfsburg through Maximilian Philipp and Joao Victor.

But in the 77th minute Stefan Bell restored Mainz's lead when he ended the corner with a precise header over goalkeeper Pavao Pervan and score. 3-2 able to be maintained until the whistle of dispersal.

Wolfsburg finished in fourth place with 61 points and Mainz moved up a strip to 12th with 39 points.

Read it too: Wolfsburg won the last ticket to the Champions League despite being offset by Leipzig

Tue Deutsche Bank Park, Eintrahct Frankfurt have ensured that they are unbeaten at home this season, equaling the score of the Bayern Munich champion team, after catching SC Freiburg 3-1.

Frankfurt's advantage through Andre Silva's penalty was eliminated by Freiburg through Jeong Woo-yeong.

Frankfurt finished fifth with 60 points and earn tickets to the Europa League next season, while Freiburg is in 10th position with 45 points.

Read it too: Schalke blocks Frankfurt's chance to enter the top four

In other matches, TSG Hoffenheim closed the season with a win 2-1 over Hertha Berlin at the PreZero Arena.

Coming behind first due to goals from Vladimir Darida, Hoffenheim were able to reply through Sargis Adamyan before Andrej Kramaric snatched the win in the first minute of injury time.

Hoffenheim finished 11th with 43 points, while Hertha has three strips and eight points below it.

Read it too: Union grabbed the last European ticket after a dramatic win over Leipzig
Read it too: Bayern close Augsburg's shaving season, Lewandowski broke the record for top scorer

Dean Smith Was Not Surprised By Aston Villa's Improvement

Dortmund key the big four after a win in Mainz

German League schedule: Lewandowski on the Threshold of Records