by Editors
in Persiraja 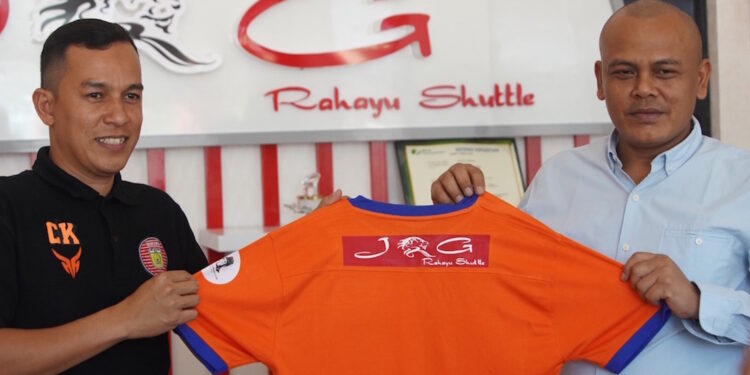 ACEHFOOTBALL.net — Autobus company from Pidie Regency, Gumpueng's Mercy Service (JRG) Shuttle is officially the sponsor of Persiraja this season. Team transport for the League season 1 2021/2022 will be handled by the original company.

On that occasion, Boss Autobus Director JRG Rahayu Shuttle, Teuku Rival and from Persiraja were represented by the General Secretary of Persiraja, with team manager manager, Sudarman.

Director of JRG Rahayu Shuttle, Teuku Rival says, His party will prepare a special bus with the Persiraja branding and will be Persiraja's transportation while on the island of Java..

“Considering that this season's competition lasts a full season on the island of Java, we will prepare a special bus there. Persiraja team wherever they compete, will use this bus,” clearly Teuku Rival.

Teuku Rival hopes, In the future JRG can build a deeper relationship with Persiraja. according to her, Persiraja is the only Liga team 1 from Aceh and Sumatra even, which must be supported.

He hopes that the club nicknamed Laskar Rencong continues to grow and develop and can be respected in national football. “And of course become the pride of Persiraja fans, and the people of Aceh,” he hoped.

Meanwhile, on the same occasion, Persiraja manager, Sudarman expressed his gratitude to JRG for being willing to work with Persiraja to maintain the dignity of Aceh's football.