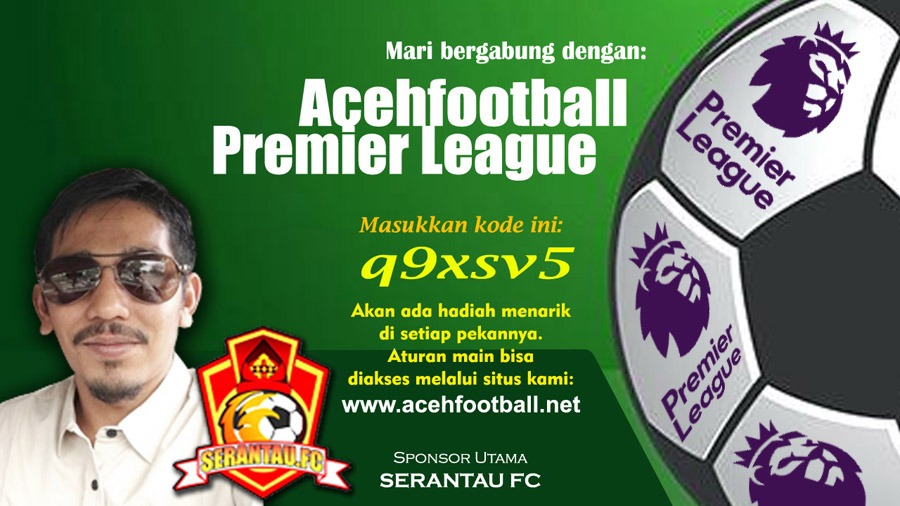 - All participants / managers are expected to register no later than the date 9 August 2019 o'clock 00.00
- Each manager is only allowed to register one account in the fantasy premier league
- Each participant is required to follow the @serantaufc and @acehfootball accounts
- All participants are not allowed to take the minus above -20 ( if there is a violation, the team is considered a disqualification of the gameweek )
- If the points are the same in the gameweek, then the top ranked team
- Regional acehfootball.net FC and provide pulses to the weekly winners of 50 thousand.
- How to take it (claim) weekly gifts, participants are required to contact the IG admin @serantaufc and @acehfootball
- New prize claims can be made after three days of weekly gameweek
- This APL competition also provides prizes for the winner of the highest points in the season half. The prize is in the form of coaching money of Rp 500.000, + t-shirts from sponsors for first place. The second winner is Rp 300.000 and the third winner is IDR 200,000
- If there are problems at a later date, only the admin has the right to make decisions.

Fantasy Premier League is a game that is popular anywhere in the world, no exception in Indonesia. FPL fans are increasing even though this one game has just appeared in the surrounding country 2012.

How to play FPL is also relatively easy. Lovers of this fantasy game only need to register a personal email address and then act like a real manager.

Each FPL account owner will be provided with funds 100 million pounds in virtual money of course. The funds must be sufficient to purchase 15 players to choose from 20 teams that play in the Premier League this season.

The fifteen players consist of two goalkeepers, five defenders, five midfielders, and three forwards. Each FPL account owner can choose players from any club but there is still a limit of only a maximum of three players from one club participating in the Premier League.

It is no less important to pay attention to the rise and fall of player prices during the competition. Player prices can go up and down significantly depending on the performance of a player on the field.

So 15 player has been determined, FPL account users are required to choose the right team captain. The selection of the captain of this team cannot be done carelessly because it can have a significant effect on the points that can be earned each week.
 
The captain's position in the FPL team is special because the points earned by the team captain will be doubled. If a player like Harry Kane can 12 points then the position of team captain will make the Tottenham Hotspur attacker collect 24 points in the week.

Another thing that is no less important is determining the formation you want to use from the first week to the end of the season. Formations that can be used are the same as formations for soccer teams in between 4-4-2, 4-3-3, or 4-5-1.

The formation chosen will determine how many points are won each week. Therefore, formation matters are also not an aspect that can be underestimated in the FPL game.

In addition, there is also a bench boost feature, free hit, and triple captain. These three features can make a difference at the right time but can only be used once per season.